When I founded Manhattan Kayak Company, I was a kayak snob. I believed that the sleek, sit-in-style kayak that hugged the body like a ski boot, making the boat an extension of my nervous system, plus the natural rhythm and efficiency of a two-bladed paddle, were superior to its canoeing cousins. My belief seemed to apply “in spades” when applied to the dynamic waterways of NYC. The low center of gravity, the minimal windage, and the basic speed seemed to prove my point over and over.

MKC was able to take skilled beginners from zero to a Manhattan Circumnavigation in a season or two, with a steady diet of basic classes and instructional touring. This type of touring refined students’ technique each time we went out, as the varying conditions dictated. As their skills and endurance increased, we went further and further. When a student could do a 15 mile round trip to the Statue of Liberty, we knew they were a just a step away from a trip all the way around Manhattan Island.

Bold students would give it a go in the same season they started, while prudent students would wait until the following year. Many of these early kayak students are now super-capable paddlers who store their vessels in the boathouse and paddle all over the world. That was, and is, the basic blueprint to paddling success in touring kayaks and sea kayaks. Surely, the kayak itself deserved half the credit?

Much of my kayak bias came from my father, Dieter Stiller, who grew up and paddled kayaks in Europe and then imported kayaks to the USA from 1959-1995. I worked with him in the Klepper shop on Union Square during summers, and then full time after college until I founded Manhattan Kayak Company in 1996. It was always so exciting to see the latest and greatest kayak models arrive and to unbox them for all to see. Elegant in design and purpose. Sleek and sophisticated. Grumman, Coleman, and even Old Town Canoes stepped aside for the new paddling kids on the block.

By 1998, a wonderful volunteer and eventual MKC partner, Abigail Kinney, connected MKC to its next home at Frying Pan Barge at Pier 63. She was outrigger canoeing there and she thought that the Frying Plan proprietor, the beloved John Krevey, would want more paddle sports at his location. We moved there and I was sharing a dock with the New York Outrigger Club.

I watched as their 400 lb, 6 person vessels ply New Yorkers waters with ease. Then, I witnessed the much smaller and super sleek two-person OC-2 and one-person OC-1 outrigger canoes flying along. Each year, an annual Outrigger Race around the Statue of Liberty led to a luau for all to enjoy. These “canoes” seemed quite at home in NYC.

It was still a different tribe though and we loved our kayaks. Nevertheless, as time went on, many of the canoeists were very pleasant and joyful people having a blast on NYC’s waters just like us. Most of them conveyed the Hawaiian “Aloha” spirit which was most welcome. However, there was very little overlap between the two tribes of enthusiasts until the rise in popularity of two vessels: the Surfski and the SUP.

The Surfski, born in similar ocean waters as the Outrigger canoe, seemed to appeal to a few of the canoeists as it was sleek and even faster. Myself and many MKC kayakers added the surfskis to our quiver of vessels and skill sets. Soon, kayakers, outriggers and surfskier’s were racing around Manhattan Island in the Mayors Cup race and having a fantastic time.

The bridge to all NYC paddlers was getting stronger. I particularly remember a top NYO outrigger padder named Dorian Walter, formerly a German whitewater slalom kayak racer, who embraced the surfski and never looked back. Years later he would win the 40-45 year old age class at the World Surf Ski Championships in Dubai. 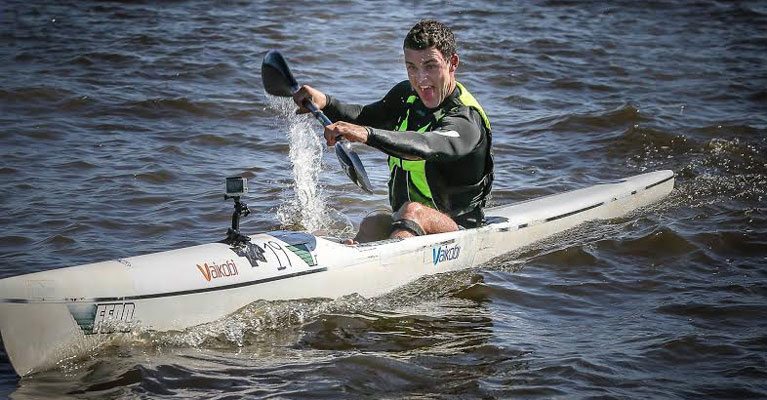 The late and great Joe Glickman, who paddled his ski prolifically, including the famous Molakai Race, helped clarify the translation. He and former MKC manager, Ray Fusco, were instrumental in getting many top surfski paddlers from all over the world to race in NYC.  Countries like Australia, South Africa, Tahiti, Hawaii, and more were all representing their skills in NYC a couple times a year. Surfkis were now firmly imprinted into MKC’s, and NYC’, DNA.

Just as the surfski had captured the hearts, minds and bodies of many MKC staff and paddlers, a tall, tan Hawaiian named Simon came knocking on our door for employment after working with Kayaks Kauai Outbound. This firm that was founded by a Micco and Chino Godinez. My father had even helped outfit them for an epic British Columbia expedition early in their paddling careers.

Simon spoke the gospel of SUP, and suggested we get a few. So I thought:  “A surfboard that can be paddled, that would be awesome!” In a month, we had 3 C-4 Waterman SUP’s on the water and it was love at first sight, but surely, while great fun to play on, not suitable for covering distance at good speed in NYC’s waters?

In 2017 a man named Chris Bertish crossed the Atlantic Ocean via SUP. Meanwhile Aleksander Doba, a 70+ year old Polish man crossed it for a third time in a kayak. Granted, both vessels are not exactly stock issue paddling craft, but the bar was set. SUP’s do long distance big time.

Before these heroics, I had already started going further and further on our SUPS. I realized that a well designed 12’6 to 14 foot SUP with good technique could do nearly anything we could do with our kayaks and skis, just not quite as fast. There was also limitations going into the wind. I proved it was true to myself making the 25 mile Sea Paddle Race around Manhattan Island in good time, well under 5 hours.

MKC staff veterans started to embrace the SUP’s more and more. Finally, the revered former MKC manager, Julieta Gismondi decided to do a solo SUP trip around Long Island. She did the nearly 250 miles in 11 days and set the stage for her and her partner Louanne Harris, to paddle from NYC to Miami in 4 months on 12’6 Bic Wing SUP’s.

We were now teaching hundreds of people to SUP and to progress from zero to Manhattan Circumnavigation in about two seasons. A dozen MKC clients now race in the Sea Paddle and SUP is officially in MKC and NYC’s DNA. It all begins with SUP 1-2-3-4!

Moreover, the utilization of the single bladed paddle greatly expanded our whole organizations appreciation for it. MKC clients started out-rigging more, outrigger people started SUP’ing more. I have rented standard canoes on vacation and really enjoy using the single bladed paddled to explore lakes upstate, and even in Oregon.

On a side note, the the world famous Freestyle Kayaker EJ Jackson, who taught me modern whitewater kayaking, has a son, Dane Jackson, who has has been world champion in both Freestyle Kayak and Canoe. He is also world class in Freestyle SUP. Spencer Lacy, grandson of a Colorado man named Joe Lacy, who helped my dad get a paddle-hold in this country, is one of the most prolific Whitewater SUP athletes there has been. SUP’s now routinely run whitewater rivers worldwide.

This is a back-to-the-SUPs origin story: It was Laird Hamilton, David Kalama, and other Hawaiian watermen who belonged to the “too short crew” who popularized the SUP around 1998. They were having a bad wave day for regular surfing and decided to use some long boards and outrigger canoe paddles and have a laugh. Soon, they found themselves catching all sorts of waves and having fun.

They went back to their workshops and started developing better boards. There was a challenge in making robust paddles that were 6-7 feet long, that did not snap like toothpicks. Within a few years, the industry had this and much more sorted out and has never looked back. I highly recommend the book The Art of Stand UP Padding by Ben Marcus to get an in depth history on it all.

MKC enjoys our version of “downwind” SUP surfing when we get strong sea breezes that come upriver from the south, meeting and ebbing current. In mid-river, sizable waves form and we can even surf upstream! Other staff and clients are traveling to SUP surfable beaches like the Rockaways or Ditch Plains in Montauk, and are really enjoying it.

MKC has discovered that many of our SUP students with memberships also take our KAYAK Basics classes and learn to kayak. Then they are able to do longer distances sooner in their paddling careers. They can build up their SUP endurance and can eventually circumnavigate Manhattan on Kayak or SUP or Ski. Hence, a new species of MKC paddler that is Trilingual! They can pick, choose, and use the vessel and the paddle that serves them best for the days journey at hand! This diversity makes Manhattan Kayak + SUP endlessly rewarding.

We have a full menu of wonderful trips that are excellent experiences all on their own. However, we recommend a progression to achieve the crown jewel: the Manhattan Circumnavigation, which is always a thrill for veterans and newfound graduates alike. Do it in a kayak, or on a SUP, and then a ski. The Trilingual Trifecta!